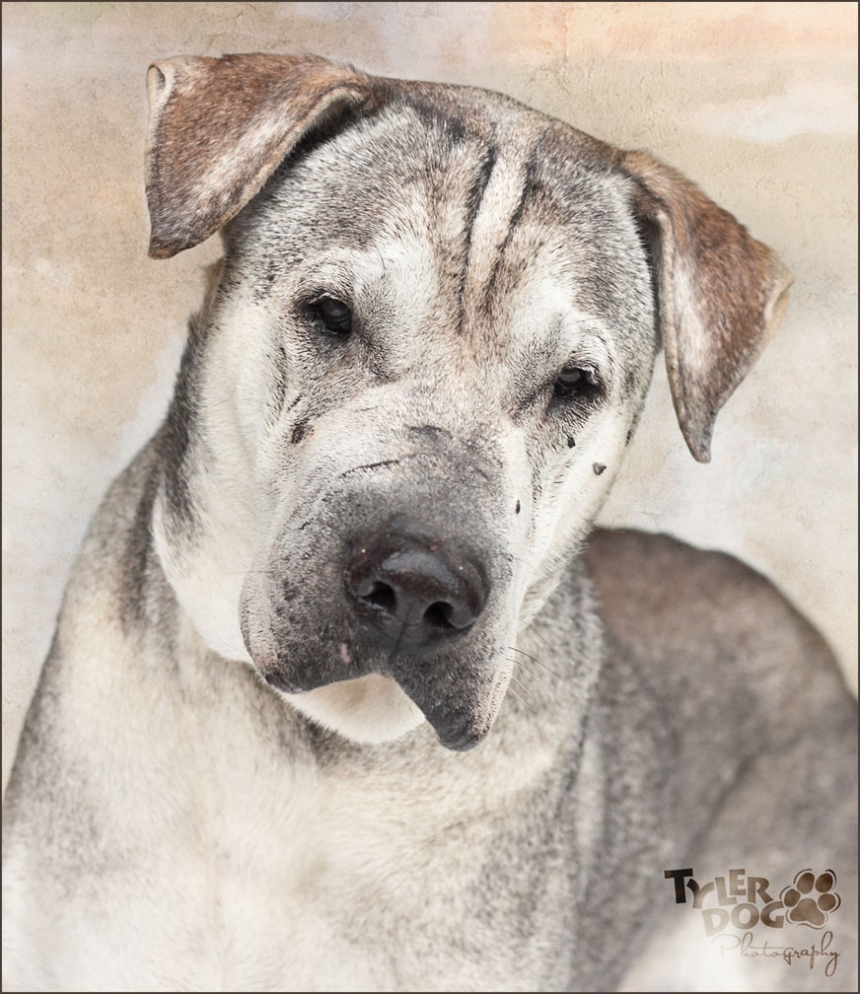 Every once in awhile you meet a dog that “gets” to you. Me? I love every dog I meet and within seconds, we’re normally best buds and they’re ready to climb into my car for the ride home. Truthfully, I’d take them all home if I could. Yet, there’s always one special dog that worms its way into your heart, when you really fall in love with the dog the minute you meet it.

That dog’s name is Warren.

Warren was a big hunk of a dog, most likely a Bloodhound / Shar Pei / Great Dane mix. He was huge! Wrinkled old forehead. Big old paws. Bayed like a hound anytime someone came near. One of those “Hey! See me? Come over here and pet me!” barks. I met Warren during a charitable photo shoot for the Sulphur Animal Shelter in Sulphur, OK. He was an old boy, probably seven- or eight years old. Rail thin. Scars all over. Callouses everywhere. And this was Warren on a good day! When Animal Control found him, Warren was so thin you could count every single rib. Hip bones stuck out like hangers. So lost, hungry, and alone.

Amanda, Marie, and the other wonderful folks at Wall-E’s Friends jumped into action. They started Warren off on a good, healthy diet to put some weight back on him. They spent time with Warren, helping him not be so lonely. Then they got him ready for his rockstar moment, to have his photo taken so maybe someone would fall in love with him as we all had, and give him a forever home. 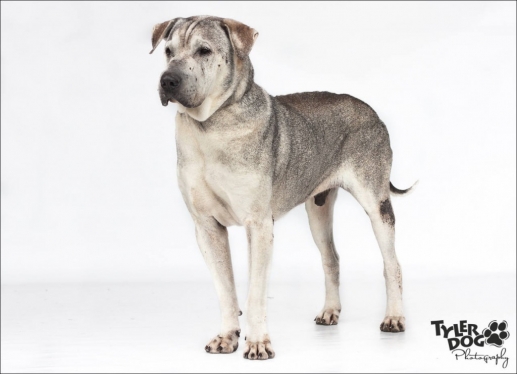 Warren came swaggering out of his kennel, looking for all intents and purposes, like Sean Connery in a James Bond movie. I could hear him now with that thick, Scottish accent, “Call me Bond. Warren Bond.” He was just that cool. The other dogs were going crazy, jumping, barking, happy to be out of their kennels. Not Warren. He stood there like a King watching over his kingdom and we were his lowly subjects.

I started my usual antics to get Warren’s attention. Treats. Whistles, chirps, squeaks. Monkey sounds. He probably thought to himself, “This is the person who’s going to make me a star?! She’s a lunatic and I think there’s something seriously wrong with her!” Nothing fazed him. He gazed off into the distance, watching everything around us, paying me no nevermind! Finally, the squeaky rubber duck worked when I tossed it in front of him and Warren gave me the “rockstar” moment I was looking for ~ the photo above showing the classic tilted head I love so much in a dog’s portrait. They say a dog is thinking when he tilts his head. Yeah, Warren was probably thinking, “She thinks that is a duck?! I am truly concerned for this woman!” 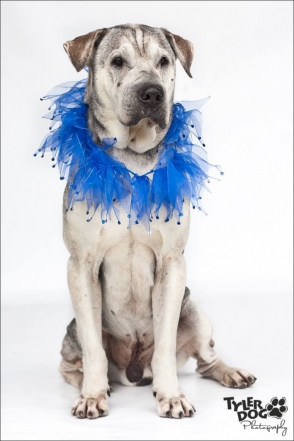 Warren even indulged my silliness and let me put a blue party collar on him. I tried pink, but he looked at me with those serious eyes that said, “Don’t even THINK about it!” After a few more snaps, Warren relinquished his spot to the next pup and I went about taking more photos.

Fast forward a week later and Izzy’s Place in Colorado saw Warren’s photo and fell in love! They decided they wanted to foster Warren until he found a forever home. No more cold, lonely kennel for this boy, Warren was headed to the Rockies!

Warren joined a family that included Julie, Melissa, Roberta, and Raisin the senior Weimaraner, and he found out living the high life was a pretty awesome thing! His foster Mom had this to say about Warren’s arrival, “Warren was so sweet, mellow, and appreciative of the new life given him. We would take Warren for strolls through the neighborhood and each time he heard a passerby say, ‘What a handsome boy!’ he seemed to hold his head a little higher. Warren and his new buddy, Raisin, soon became best pals and enjoyed exploring the big yard together. You could tell he loved having a comfy home where he knew he belonged.”

Alas, after a few weeks, they knew something was amiss with Warren when he started showing signs of discomfort. His family rushed him to the vet where, after several tests and x-rays, they were devastated to learn he had a mass in his abdomen.

And it was inoperable.

That afternoon, Warren got to spend a few more hours at his home, surrounded by the love of his foster family, where he was laid to rest. His foster family had this to say, “Do we miss the big lug? More than words can say and we wish he had more time with us. But this is really a success story because, in animal rescue, three wonderful weeks in a home is worth a lifetime to a dog like Warren. Rescuing senior dogs has taught us to appreciate moments, rather than years, and we are honored to have been able to share Warren’s best moments. He left footprints on our hearts.”

He left them on mine, too.

Heaven just got another angel and his name is Warren.

What a touching story. So happy for Warren that he was loved and given the home he had been searching for. Tears but so happy he found a family where he belonged.

Warren truly was a special boy and we are honored that he became part of our rescue family. In his short time with us he touched many hearts and taught life lessons. He loved following his foster family everywhere, lounging on the bed, being cuddled by young Melissa. She even gave him a special stuffy toy when he arrived. Warren still touches my heart each time I see his pictures and remember his story. Thank you for sharing Warren’s story….we hope it helps bring awareness to seniors like Warren, who deserve a second chance to enjoy their retirement years.