“The greatness of a nation and its moral progress
can be judged by the way in which its animals are treated.” ~Gandhi.

It recently came to our attention a bill called SB32 is headed for the Oklahoma Senate for its first reading on February 4th. SB32 is considered an “emergency” bill and will allow municipalities to authorize restrictions on ownership of any dog breeds within municipal limits. This means your local government will have the ability to tell you what kind of dog you can own for any reason. This isn’t the American way and we vehemently oppose this law.

Current Oklahoma law prohibits breed discrimination. SB32, while not targeting any one breed, will open the door for specific breeds to be banned. As you may or may not know, breed specific legislation (BSL) exists all across the United States, mostly targeting Pit Bulls, Dobermans, and Rottweilers and hasn’t proven to be an effective deterrent to dog bites. In Denver, Colorado, thousands of Pit Bulls were put to death once they passed BSL and you cannot own a Pit Bull if you want to live in there (warning: the previous link contains graphic images taken of Pit Bulls killed in Denver).

The Humane Society of the United States has taken the position BSL laws are ineffective for a number of reasons:

Breed bans don’t address the real problem, which is irresponsible owners. Lack of socialization, training, cruelty and abuse are factors that create aggressive and dangerous dogs. If I took a dog, put it on a chain or left it alone constantly in a backyard, fed it a couple times a day, kept my interaction with the dog at a minimum and never made it part of my family unit, I would create an isolated, unsocialized, potentially dangerous dog because of how it was raised. Surely people don’t do that, right? It happens all the time. In Oklahoma, Arkansas, and other places I have traveled, I’ll see a lonely dog tied to a tree, surrounded by dirt, maybe a water bowl nearby, sometimes a dog house. The look in the dog’s eyes is telling. They’re sad. Lonely. Afraid. Pleading for a life of love, but relegated to a life of neglect and abuse.

I’ve known people with Chihuahuas who were incredibly aggressive. Get near their owner and the dog would snap and bite, snarling the entire time. Their owners laughed, thinking it was cute. It’s not cute. It’s an unsocialized dog with a great propensity to inflict harm. How cute would it be if the Chihuahua decided to do that to a baby? A newborn? Could it inflict damage, possibly kill? Of course it could. Should we add Chihuahuas to the banned list? The way SB32 is worded, they could.

The bottomline is this: Any dog can bite. It’s up to the owner to raise a socialized and stable dog, regardless of size or breed.

We already have laws in place to deal with aggressive and dangerous dogs. Instead of passing a new one and wasting taxpayer money, why not enforce those already in existence? Create a task force and address the issues of cruelty and abuse. Outlaw chaining. Make spay/neuter laws mandatory. Offer educational opportunities for those who simply don’t know and teach them how to raise a happy, healthy, and socialized dog. There are other ways to deal with this issue other than attempting to regulate what kind of dog a person can own. This law would do nothing but punish good owners and allow bad ones to continue being irresponsible. 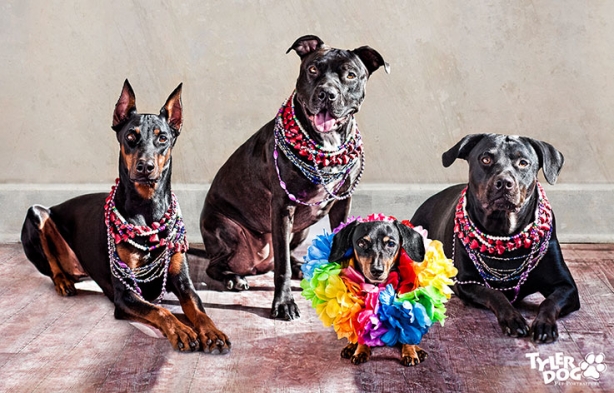 I’m part of a Facebook group opposing SB32. The group,  Oklahomans Against Dog Breed Bans, has over 1,700 members since Saturday, January 12 and is growing. We encourage you to join us. We’ve provided Facebook timeline covers for you to use, a sample letter to customize and send to your elected officials, and more. Our official position on SB32 can be downloaded here.

We also have a petition on Change.org that we started on Saturday afternoon. Five days later, we reached our goal of 5,000 signatures and the numbers are continue to climb! We are asking people to continue signing until we are ready to deliver it to Oklahoma City, the Senate and Governor Fallin. Help us reach 10,000 or more signatures by February 4th. Click this link to sign the petition opposing SB32. Help us make a difference! If you would like a downloadable petition to print out and gather signatures, click here to download it (Adobe Acrobat file). Make sure to get it back to the address on the petition by February 4th.

I sat down last night and started thinking about how many Pit Bulls I’ve photographed in rescues and shelters over the years. The numbers are unimaginable. So I felt moved to create a video sharing how I feel about them and many other breeds I’ve photographed that could be discriminated against and banned if SB32 passes. Take a few moments and click to watch “Save Lives ~ Oppose SB32.”

My canine family, pictured above, consists of four dogs, three of which would be on most banned lists. In one fell swoop, my entire family could be wiped out. Katie, my beautiful Doberman Pinscher who will be six this year: dead. Maggie, my goofy and lovable three-year-old Lab/Rottweiler mix: dead. Xena, my rescue four-year-old Pit Bull who loves to sit on your lap and give you sloppy, wet kisses: dead.

Find your Local Representatives and Senators

Since we all know passage of this bill will lead to Pit Bull bans, I’m creating a list of positive pit bull resources for further education. There are more, but these are just a few to start.

Nashville Paw (this magazine has some great articles) http://www.nashvillepaw.com/bully

Thank you for this information. I hope people relize the impact it will have to these breeds that do not have a say on this bill. They need to open their eyes and see the big picture.

Exactly! That’s why we’re fighting it so vehemently! Please help us by sharing this link and informing those who don’t know.

You’re welcome! Please share this link so we can gather strength in numbers. A great portion of the population has no clue this bill exists and could affect their dog, regardless of what breed it is!

These laws are horrible! Where does it end? Matter of fact don’t ever let anything like this start!

Thank u for all info. I cant imagine puting my 35lbs pitbull, marble, down! I refuse, she saved my life, i will do the same for her

Very informative blog post by our friend Sherry Stinson. Please take the time to read & then join us to stop SB32!

Please read this information blog post by my dear friend & fellow soldier, Sherry Stinson. Then join us as we fight SB32!